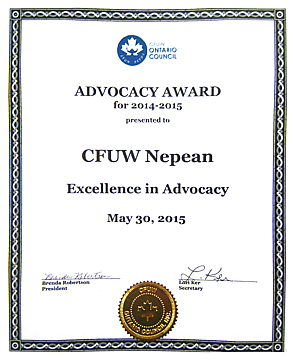 CFUW members, throughout the year, sent letters of concern to municipal, provincial and federal levels of government on such matters as Long Term Care, Guaranteed Basic Income, Human trafficking, Gun Control, and the peace process in Afghanistan.  We also became a signatory to the statement, authored by the Canadian Centre for Gender and Sexual diversity, Wisdom4Action, and Action Canada for Sexual Health and Rights, which calls upon feminist leaders in Canada to proclaim their commitment to trans inclusion and the rejection of Trans-Exclusionary Radical Feminism.  CFUW Nepean brought this to the attention of national, who became a signatory as well.

In October, CFUW Nepean executive decided that the issue of single use plastics in the environment was  sufficiently concerning that a resolution about banning them should be proposed to National.  The submitted intent was accepted by National, a resolution was researched and prepared, and submitted before the deadline in January.  Suggested amendments from five clubs were considered, changes made, and resolution re-submitted.  Comments of approval have been received from several clubs.

Resolutions from other CFUW clubs were forwarded by National. These  were examined by teams of CFUW Nepean members, and amendments sent to the clubs involved.

Outreach, active throughout the year, distributed knitted items, toiletries, pjs, and Tim Horton cards in December to Cornerstone, Interval House, and the Elizabeth Fry Society.  In the spring, further contributions such as diapers, were made to Interval House.

CFUW Nepean joined CFUW Ottawa in the Walk to Kabul, a virtual walk to express concern for the treatment of girls and women in Afghanistan.  Ten members, joined by family and friends, walked 3991.8 kilometers.

The EAC (Environment Action Committee) , a new CFUW Nepean initiative, meets the first and third Thursdays of each month to discuss  possible club action to benefit the environment.  The Green Grapevine informs members about products which can help replace and reduce plastic use.

In June, CFUW Nepean will assist in the distribution of 15,000 saplings.